The AffloVest is the first truly portable High Frequency Chest Wall Oscillation (HFCWO) vest. The Aflo vest is the modern approach to HFCWO devices. Unlike bulky, traditional HFCWO devices, AffloVest is lightweight and runs off of battery, AC outlet power and can also be operated/charged with an optional car inverter. No hoses, no carts – life is truly untethered!

Both AffloVest and conventional HFCWO vests operate on the same principal- percussive forces transmitted to the lungs to mobilize secretions. Because it relies on air to create a single waveform, older technologies must deliver that air in large volumes, at a high amplitude to rapidly inflate and deflate an airbladder. To be effective, this requires tight squeezing of the patient’s torso and rapid, repeated and uncomfortable compression. This can also lead to conventional vests “riding up “on the patient’s torso into uncomfortable positions. AffloVest’s modern technology does away with the squeezing and compression while still providing effective, comfortable treatment.

AffloVest uses mechanically generated waveforms  from eight oscillating motors sewn into the vest whereas older technology creates only one waveform transmitted through an air bladder. AffloVest’s eight motors create eight individual waveforms creating more disruption  and mobilizing secretions without the squeeze and thump. The use of individual motors allows  Afflovest to target different areas  of the lungs including the upper lobes front and back areas missed by conventional HFCWO’s which typically target the pectoral line and below with no squeezing and compression,  the user can breathe normally during treatment.

AffloVest’s features make it completely posturally independent. Patients can use AffloVest in any position and receive treatment while 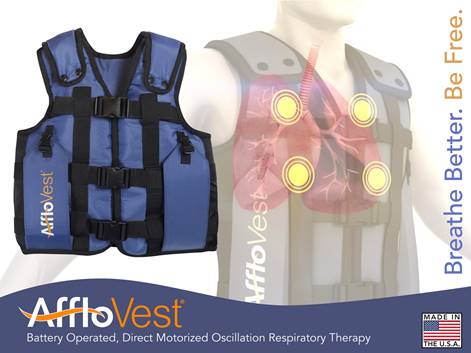